Brands and marketers looking to get the largest bang for their mobile advertising buck now have an easier decision to make when it comes to choosing their platforms.

Despite the fact that people are increasingly expressing their discontent with Google and Facebook’s duopoly in the online advertising realm, they lead the pack when it comes to driving the most significant amount of return on dollars spent.

A new study produced by analytics company Singular, which analyzed $1.5 billion in advertising spend and $2.7 billion in digital revenue, has revealed that the two digital giants are continuously generating success for advertisers on iOS and Android devices in nearly every category and geographic region.

Perhaps more surprisingly is which platform is currently holding the number three position. Excluding gaming ads specifically, Snapchat – which has implemented a variety of new features to draw more advertisers to its platform - seems to have made a major push to becoming a more valuable advertising platform for advertisers. Twitter also seems to be making a strong comeback, as it won a ranking for its mobile ad ROI for both global iOS and global Android devices, as well as achieving various other high rankings in certain regions, verticals, and retention-based charts. 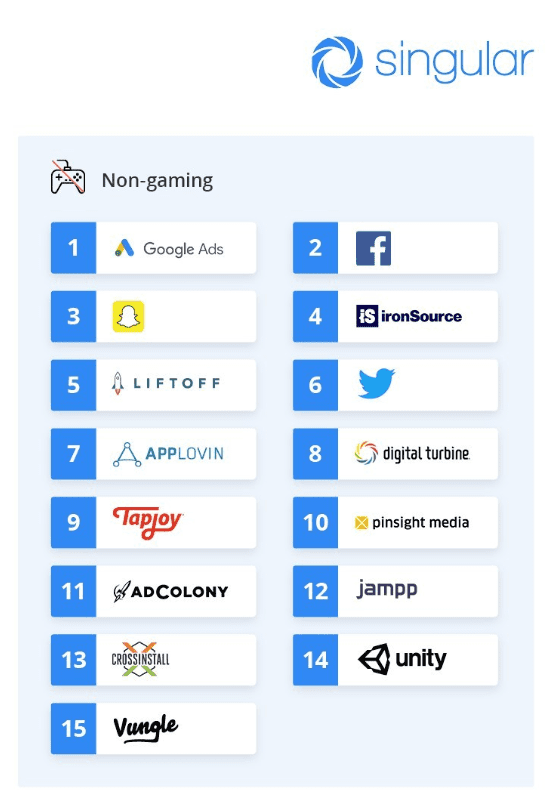 The study also shined some light on how Android ads perform vs its iOS counterpart. In short, Android advertising ROI seems to be much more unpredictable than iOS. One third of all the ad networks offering placements via Android devices that were covered in the report are new. Conversely, only two new advertising networks appeared on the index for iOS.

There weren’t a lot of “steady” mobile networks either (aside from the well-known ones), as 73% of all analyzed networks experienced some form of movement in the rankings.

To summarize all of this – there’s lots of shifting going on from the newer contenders, with some performing quite well when considering who they’re competing against.

The volatility in the mobile advertising space can likely be attributed to the excessive amounts of fraud taking place right. Although with increased activity comes increased countermeasures.

Many of the mobile networks featured in the study have made a commitment to becoming more transparent by revealing more precise details such as where and when ads are being displayed amongst their partner websites.

Still, fraud remains to be a big issue, as Singular had to remove a record 15 networks from its index this year due to high amounts of fraud.

Other Findings & The Road Ahead

It’s important to note that there were zero performance networks that specialize in mobile user acquisition that made it into the index this year. This is likely due to the fact that more robust fraud detection methods need to be put in place.

Data is another key insight from the Singular study, as this year’s report involved more people, devices and digital activity than any of its previous indexes have ever contained, which is actually beginning to create some concern in the marketing landscape. An earlier study by Singular revealed that 30.92% of marketers think their biggest challenge in 2019 will be converting new forms of data into actionable insights.

Also, with the rise of GDPR in Europe and the California Consumer Privacy Act (CCPA), consumer privacy, trust and data protection is clearly becoming a significant concern as we progress deeper into 2019.

Ultimately, the findings reveal that taking a single-network approach isn’t going to cut it anymore. As more options become available, more functionality is implemented amongst those options, and their respective audiences continue to diversify, advertisers and brands will really need to start putting their eggs in multiple baskets.

If you have any questions about the insights above, feel free to reach out to our affiliate management team. They’ll be happy to chat about where the most lucrative offers are at any given time to help you spend less time thinking about where to do your spending, and more time focusing on your growth strategy.