In an attempt to capture more of the digital advertising market, Reddit will be expanding its ad program to include the cost-per-click format to all advertisers.

A Reach for New Advertisers

There are some splashes being made to rival the likes of Facebook and Google. Recently, Reddit has made a push forward into generating more digital ad revenue by announcing that it will now be offering CPC ads on its social network. This announcement comes as Reddit aims to focus more on growing the performance side of its business.

“While cost-per-click advertising isn’t innovative, in itself, the launch marks a big moment for the Reddit Ads business,”

“This is a point of inflection that helps get us to parity in the market and will change the way advertisers think about our capabilities.”

With the addition of the new Reddit ads, advertisers who are looking to move some of their digital budget to the network will be able to leverage four different campaign objectives: traffic, reach, video views, and conversions. It’s also worth noting that Reddit ads will display on any type of device or platform.

For now, the ads will essentially act as a “top post takeover”, meaning ads will be displayed at the top of the reddit content feed for 24 hours. However, Reddit has hinted that they will likely be launching a more targeted component that would allow advertisers to target relevant subreddits.

From a demographics point of view, Statista reports that 58% of Reddit’s userbase are in between the ages of 18 – 29, compared to 22% of the total U.S. adult population. The network itself claims that it currently has roughly 330 million monthly active visitors, 18 billion page views, and an average time of 16 minutes spent per day on the site. 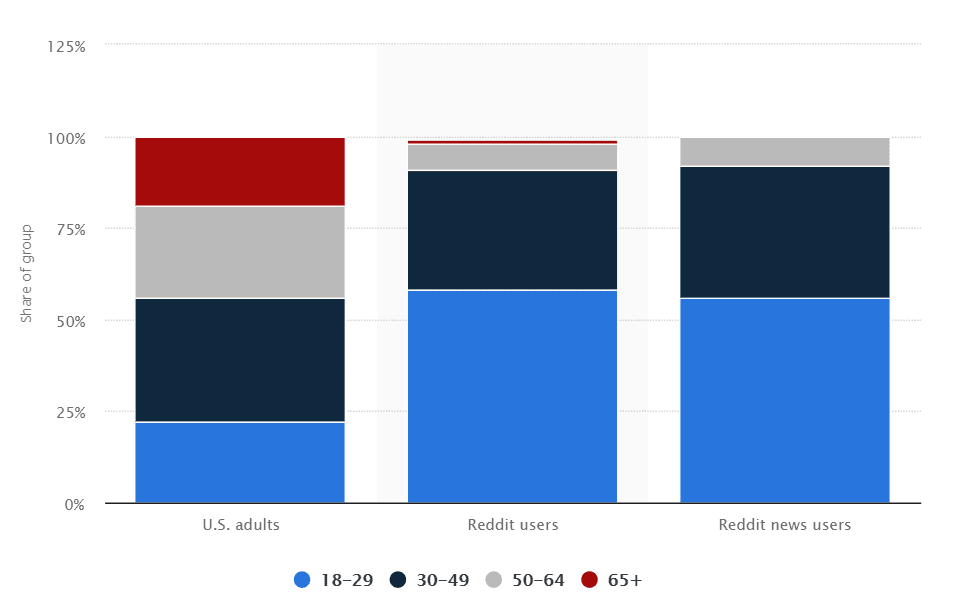 Reddit first rolled out its performance program back in 2016, with a team of 59 sales people dedicated to growing sales and onboarding more advertisers.

Now, it would seem that Reddit’s primary goal in 2019 is to increase its advertising revenue, as the original team has nearly doubled, and the company shifts more of its focus on broadening advertising functionality and marketplace capabilities.

The company declined to get into specifics, but Reddit says that since the inception of its ad program, revenue has grown to five times that of its original amount.

In a time where there’s more ways for advertisers to diversify their campaigns, Reddit seems both ready to take advantage of the opportunity and willing to provide brands and marketers with a large (but niche) social following to reach with their ads.

With growing concerns revolving around the way Facebook handles user data, and Google’s rush to try and better facilitate voice-related searches increasingly being entered into its search network, there’s an opening for other advertising platforms to disrupt the duopoly. One need not look further than what Amazon has managed to accomplish with the introduction of their ecommerce channel advertising format (ECA).

Jandali admits that this is a key reason why Reddit’s is making the moves that it is, despite the fact that they have a long way to go before they’re considered a serious contender.

"This is a point of inflection that helps get us to parity in the market and will change the way advertisers think about our capabilities,"

"The characterization of a duopoly is what advertisers are concerned with and it is finally affecting their business."

As mentioned above, we’re experiencing what appears to be various attempts at disruption and diversification in the market, something that always leads to an opportunity for advertisers who are willing to try something new. For those looking to dive in and start making an impression on Reddit’s demographic, you can get started with Reddit ads here.

If you have any questions about Reddit ads, or if you’re simply looking to get more insight on best practices to minimizing your CPC, don’t hesitate to reach out to our affiliate management team. They’re always ready to answer your questions and help you maximize your digital impact.