For the first time, mobile app advertisers will be able to deploy app install ads on the popular social news platform.

In an effort to ramp up its ad revenue, the website Reddit recently revealed that it will be adding app installs as a new campaign objective to its performance advertising bundle. 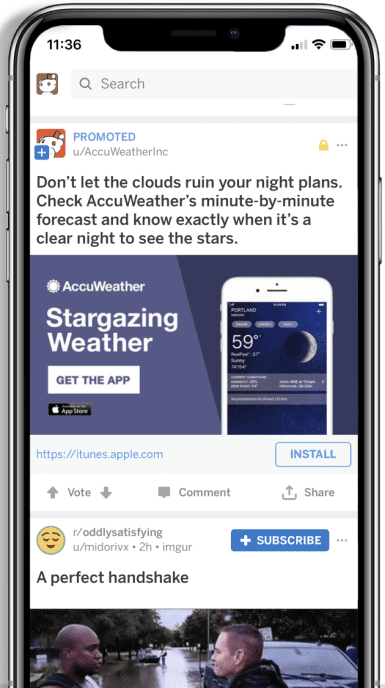 As of now, any mobile advertiser can take advantage of this new format by choosing “App Install” as their campaign objective, which will then immediately target people accessing Reddit via its mobile app and drive those users to the advertiser’s respective listing on either the iOS or Android app store.

Payment for these add placements will follow the familiar bidding format, where advertisers only pay when a user clicks through the add and places on the app store.

The app install format isn’t the only splash the social site made in its recent announcement. Advertisers running Reddit ads can now additionally take advantage of a greatly enhanced conversion pixel with new, more advanced tracking and measurement features.

It has been a busy start to the year for Reddit, as these new extensions to its advertising program come only weeks after the company announced that it was introducing  CPC ads to its site. The app install format will join CPC, as well as CPM and CPV to Reddit’s current bundle of performance offerings.

With 330 million daily active users combined with the recent $300 million the company received in financing from Tencent, the company seems ready to make a significant push into competing with Google and Facebook to capture some of their advertising market share.

"We can now assure advertisers that you are going to have a positive experience on Reddit and potentially even a new experience, a new way of connecting with customers,"

There already appears to be proof in the pudding too, as major brands like McDonalds and KFC have already started deploying ads on the medium.

Now valued as a $101 billion industry worldwide, it’s no surprise that Reddit is making quick strides to introduce capabilities that allow it to break into the app advertising market. Mobile app downloads experienced a 35% increase in growth last year, rising to 194 billion installs, with mobile games being a key segment within the total base.

In a year where we’re seeing aggressive disruption in the mobile marketing realm, one thing should be clear for brands and advertisers: the time of simply rolling out a campaign or Facebook or Google and then calling it a day is over. While those two platforms are still going to generate healthy ROI, you’d be wise to start diversifying your placements.

To that end, Reddit seems like a great place to begin testing if you’re promoting mobile games or any mobile app, as the company is clearly taking its advertising model much more seriously than in previous years.

If your target demographic falls under the 18-29 age group, you may find Reddit’s advertising bundle particularly valuable, as the most recent Statista report has that comprising of over half of Reddit’s total userbase.

In any case, if you don’t test, you’ll never know. Those who take the risk might find the reward to be well worth the effort!