Consumers will be starting their holiday shopping sooner than you might think this year.

With back to school shopping now underway, brands and marketers have their eyes set on the next big prize: the 2019 holiday season. A new survey published by Facebook states that one in every five Americans (and one in ten worldwide) will be making their first holiday purchase in October or earlier this year. 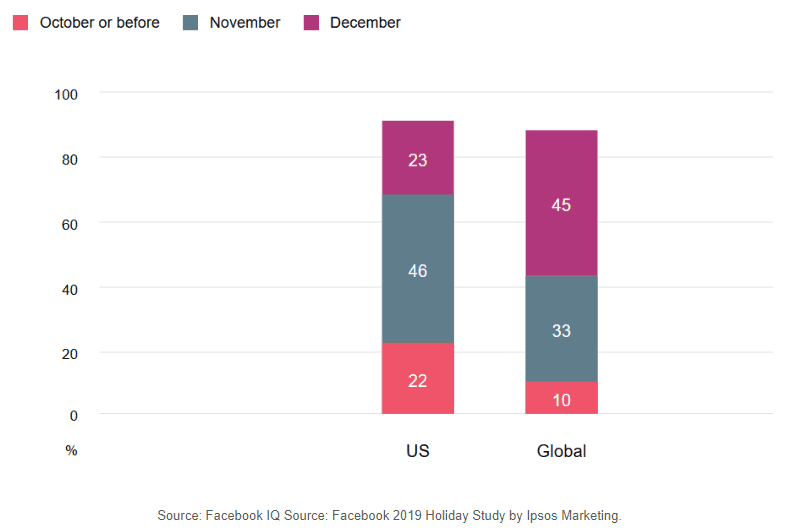 Image Source: Facebook.
The survey goes on to reveal that last year, 43% of global shoppers will have started their holiday shopping in November or earlier, with half of them being completely finished by December 3rd. Additionally, their purchase amounts have also increased at earlier periods in the season.

Not only are consumers making their purchases earlier, but they’re also increasingly turning to their mobile devices to satisfy their shopping needs. More than half of them are expected to make purchases on their phones this year. This follows last year’s findings that revealed that 49% of consumers in the US made an ecommerce transaction, up from the 45% in 2017 and 30% in 2015.

While mobile transactions are on the rise year after year, so too is the standard for the mobile experience, which - even though has been steadily increasing over the last few years - still has a long way to go. Of those surveyed, 85% noted that they came across at least one problem while holiday shopping on mobile. These problems included things like load speeds (26%), font size readability (25%), product information that was difficult to read (22%), content not fitting on the screen (22%) and images not displaying clearly enough.

Patience seems to be in short supply as well, with 70% of consumers saying that they have no problem taking their business elsewhere if the user experience is stronger somewhere else, which means that those who aren’t delivering a strong mobile shopping experience could quickly see their conversions dropping.

Unsurprisingly, Facebook’s study also covered how users are engaging with social media to help aid their holiday shopping efforts. It would seem that the Stories format is quickly becoming the new “Window Shopping” for those who want to do their research before purchasing in-store or online. 63% of shoppers either watched or posted videos via the Stories format across platforms such as Instagram, Facebook and Snapchat during the 2018 holidays. In that same period, a third of millennials and parents claimed to have been influenced by videos on social media helping them choose what to buy.

On top of that, 69% of people find Stories on Facebook and Instagram to be a great discovery mechanism for new products and services, and 62% of them become more interested in a brand or product after seeing it in Stories.

These findings come as advertisers ramp up their media spends and focus more of their resources on social video ads like Stories. In fact, video spends on social media are on pace to jump from $28.7 billion by the end of this year to over $30 billion by 2021.

In terms of advertising strategy, brands and marketers should really start treating Q4 in its entirety as the holiday season if that mindset hasn’t already been adopted. With Black Friday, Cyber Monday, Green December and the Christmas holidays, there are plenty of opportunities to capitalize significantly off the increase in consumer spending.

From an optimization standpoint, enhancing the mobile experience should be paramount in your digital efforts this holiday season, and now is the perfect time to start before the shopping surge begins. Finish the summer off by focusing on improving areas such as your mobile load speed, how the navigation appears on a mobile device, and how content is being displayed. Ensure that readability and findability are easy for consumers this year, and you will be rewarded for your efforts.

If you have any questions about these findings, or want to know more tips and tricks about how to position yourself for success in the final stretch of 2019, please reach out to our performance management team. They’ll be happy to help you optimize your campaigns and drive more digital revenue.