For the first time in history, digital advertising revenue is expected to exceed that of its traditional counterparts.

The State of Digital

Move over traditional media, because there’s likely to be a new heir to the throne in 2019. A recent eMarketer forecast has revealed that digital ad spending in the United States is on pace to surpass traditional ad spending before the end of this year. On top of that, by 2023 digital is expected to take up more than two-thirds of total media spending.

eMarketer predicts that total US digital ad spending will tally to $129.34 billion this year, a 19% increase from 2018, and surmounting to 54.2% of the total advertising market.

As with previous years, mobile is expected to be the most significant contributor to digital’s growth this year, which is predicted to account for over 66% of digital spends and reach over $87 billion dollars.

Another key area of interest in regards to digital’s growth is the rise of Amazon’s advertising program, which – for the first time – has led to the combined advertising share of the Facebook & Google duopoly to drop. 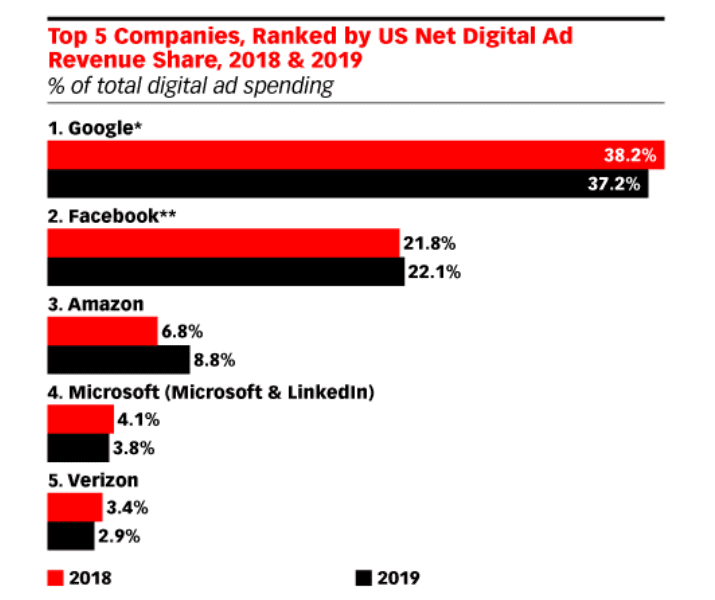 Amazon’s advertising economy in the US is poised to grow by over 50% this year, leading to a grab of an additional 2% of the digital advertising market. This comes as the ecommerce giant shattered a 2018 prediction that it would cap the year at $4.6 billion in ad revenue, when in actuality it produced more than $10 billion.

A large portion of Amazon’s recent success in the advertising realm can be attributed to its Ecommerce Channel Advertising format, which has seen advertiser usage swell substantial since January 2018. The ECA format utilizes brand product listings via the Amazon shopping platform, directing users to a product’s Amazon checkout page instead of its own domain.

“Amazon offers a major benefit to advertisers, especially CPG and direct-to-consumer [D2C] brands,” said Monica Peart, eMarketer’s forecasting director who was at the helm of producing these insights. “The platform is rich with shoppers’ behavioural data for targeting and provides access to purchase data in real time. This type of access was once only available through the retail partner to share at their discretion. But with Amazon’s suite of sponsored ads, marketers have unprecedented access to the 'shelves' where consumers are shopping.”

Spending in the ‘Directories’ category, like Yellow Pages listings, will suffer the largest blow at 19%. Print media isn’t far behind it either, as newspaper and magazine ads are likely to lose nearly 18% of its advertising revenue by the end of the year. 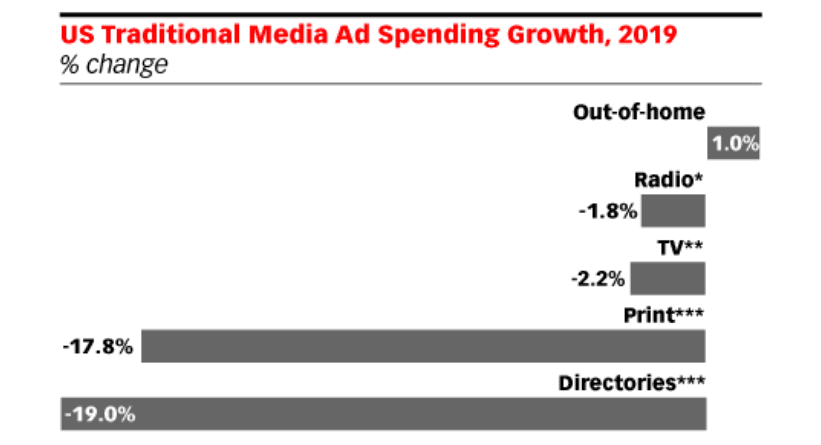 “The steady shift of consumer attention to digital platforms has hit an inflection point with advertisers, forcing them to now turn to digital to seek the incremental gains in reach and revenues which are disappearing in traditional media advertising,” Peart added.

As Peart states in the above comment, it’s quite clear that brands are increasingly becoming more accustomed to the vast capabilities digital has to target audiences in different ways. And with a much more economic model of paying per click, action, install or impression, advertisers don’t need to invest a massive amount of money before seeing their return.

The insights above once again highlight the volatile state of the digital space right now. We’re seeing competition fiercely intensify – especially between Google, Facebook and Amazon. But it’s certainly not limited to those contenders. Reddit has recently made a variety of large announcements to ramp up its performance program, like CPC and app install ads. Also, as privacy becomes a more important factor in terms of where internet browsers are spending their time online, platforms that cater to a more transparent, anonymous experience are also seeing increased success, like DuckDuckGo and WhatsApp.

While the increase of digital spend spells more competition for advertisers, there are also more channels to diversify your marketing strategy. Experiment with some of these new channels in 2019, and see where the data guides you!