Now that the holiday dust has settled, we look back on some of the significant advertising trends from Q4 2018.

Looking Back to Push Ahead

With the holidays being a major seasonal peak that many brands and advertisers depend on to generate large amounts of their annual revenue, it can often be a great opportunity to learn more about how companies are focusing their digital efforts and pivot accordingly in the new year.

To that end, a new report recently published by Kenshoo lifts the curtain on where the most considerable gains took place when it comes to advertising channels in Q4 2018. While there was a lot of movement in the online realm as a whole, three primary aspects were identified in this report: Search advertising, Instagram, and Ecommerce Channel Advertising (ECA).

Despite there being both more channels and ways to utilize those mediums than there has ever been before, search advertising still has a pivotal role to play in advertising spend and consumer influence, with over $120 billion being spent on ads last year.

In Q4 specifically, search spending increased by 14% year-over-year, and clicks and impressions grew even higher, achieving 31% and 47% growth respectively.

It’s worth noting that the increase in clicks and impressions wasn’t simply the result of the increased spends, in fact – with the average clickthrough rate actually being lower in Q4 2018 than in Q4 2017 (from 2.5% down to 2.2%), advertisers were actually getting more bang for their buck.

This can largely be attributed to the increased ability for advertisers to further break their targeting down on both a device level and individual product SKU level. Because these granular targets and ads likely receive less clicks and impressions than a more general ad, the competition – and therefore the CPC – is ultimately lower.

It was a banner year for Instagram, with the platform receiving a 120% boost in ad spending in Q4 year-over-year and officially becoming the second largest social ad platform in the world. The success of this platform, despite various missteps from its parent company in 2018, is primarily due to the huge amounts of rising popularity swirling around its Stories advertising format.

Interestingly, most of the increased spend came from existing advertisers who have been advertising on the platform for at least a year or longer. Combining that with the fact that these advertisers are also spending four times more on the channel than those who only hopped on the bandwagon in 2018, it would seem that there is both lots of hesitation with new advertisers, and lots of success for those who are ramping things up.

From a broader perspective, social videos were also a big story in Q4 2018 (and previous quarters), representing 40% of total social media advertising spend. This comes as new studies which reveal the significance of social videos and users – especially younger ones – become more prevalent. 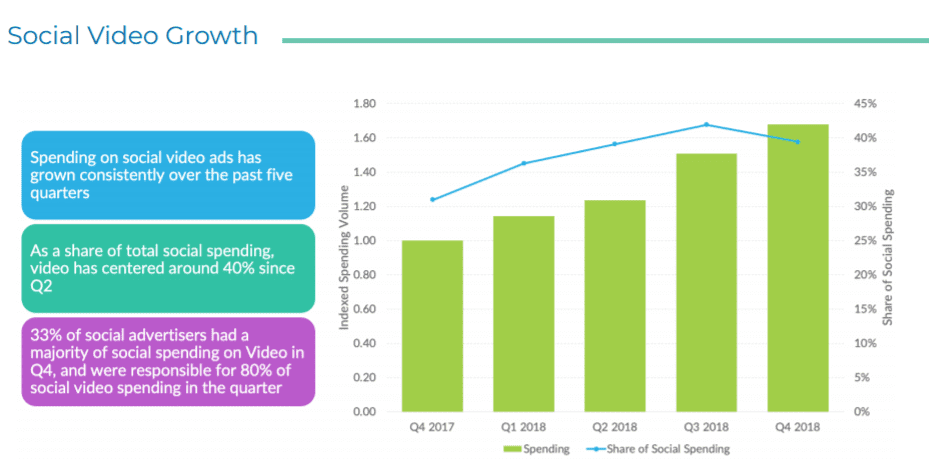 One of the big new channels that really made a name for itself in 2018 was Ecommerce Channel Advertising (ECA), which is particularly prominent on Amazon. Late last year, a Marketing Land article proclaimed that the format led to Amazon becoming the third largest digital ad seller in the United States, and the channel has seen its shares of success since then. From January to December last year, ECU spending grew by five times the amount.

Unlike the more conventional digital outlets, the ECA format exists within online stores, capturing shoppers’ attention while they’re already doing their browsing, and pointing them to that respective marketplace’s checkout instead of their brand website or product page.

For brands moving forward – particularly medium and smaller sized ones that may not have the resources to run digital campaigns on a bunch of different channels and at a hyper-granular level, the findings above should help narrow down where some of the major opportunities are.

Having said that, these insights can be leveraged by advertisers of all shapes and sizes. From a search perspective, it’s critical to start refining your targeting methods. 2019 should be the year you’re running device-specific campaigns, and if you’re driving B2C traffic, product ads may not get as much traffic, but the traffic they do get is cheaper and likely has a higher chance of converting.

Social marketers – the Stories format was the big opportunity last year, and signs are suggesting that will stay true in 2019. Even if you’re one of the hesitant ones who may be fearful to ignite the spark on Instagram (which hopefully you won’t be after viewing these findings), there are various other channels that can utilize the format, like Whatsapp, Facebook, and even Google.

Finally, and perhaps most importantly, now is the time to jump into the ECA format. Amazon’s userbase is only getting larger, and as the company continued to evolve and more consumers opt to do their shopping there, its lucratively will only increase from an advertising perspective.

We recommend reading the full Kenshoo report, as there are lots of additional takeaways that will likely be a boon to your advertising efforts over the course of this year.

May your tactics be bountiful this year!